Security is the most complex and important requirement that is considered by all customers. It gets even more important in the cloud environment. In this post I’d like to share my experience about Fusion Applications security concepts and a new tool (Security Console) that helps users to setup access to the system easier.

To tell the truth I was a little bit confused when I started to learn Fusion Applications Security concepts and found out that identity and access management subsystem is external and separated from business application. In the most all old ERP applications I have worked with security was incorporated in a system core (SAP HCM, Oracle E-Business Suite). But there were also new web applications that had a dedicated security subsystem. Those systems like Taleo, Hyperion were based on a Service-Oriented Architecture (SOA).
Later I realized that it makes sense and a dedicated security model is optimal for SOA applications. That’s why oracle development team brought this approach in Fusion Applications. It also confirms oracle’s statement that Oracle Fusion Applications combine the best of the Oracle business applications Oracle currently provides.

Data role is a combination of a employee’s job and the data instances that users with the role need to access. They aren’t delivered as part of the Security Reference Implementation but are always locally defined. They are assigned directly to users.

Abstract roles represent a employee’s role in the enterprise, independently of the job that the worker is hired to do. Three abstract roles are delivered with Oracle Fusion HCM. These are the Employee, Line Manager, and Contingent Worker roles. You can create custom abstract roles. You assign abstract roles directly to users.

Job roles align with the job that a worker is hired to perform. (e.g. Human Resource Analyst). You can create custom job roles. Typically, you include job roles in data roles and assign those data roles to users.

Function Security Privileges secure the code resources that make up the relevant pages, such as the Manage Jobs and Manage Positions pages. Some user interfaces aren’t subject to data security, so some function security privileges have no equivalent data security policy.

The above functional roles are technically implemented as Enterprise and Applications roles. The Abstract, Job and Data roles are called Enterprise roles and the Duty role is called Application role.

Across all Fusion Applications, Abstract, Job and Data roles are mapped to Enterprise roles . These roles are stored in the Identity Store. They are managed through OIM and Identity Administration tools. This tool includes the following capabilities with respect to Enterprise role management:

In fact previous security model (Before Release 10) was very complicated. There were too many duty roles associated to a Job Role and it was very difficult to customize job roles. Although Security Console has been released in Release 9 there was difficult to use it with old security model. Starting with Release 10, you receive a new, simplified reference role for each predefined job and abstract role that existed in the previous release. Also Oracle strictly recommends to upgrade your Fusion Applications instance to the Simplified Reference Role Model before migration to upcoming Release 11. Fore details please see the following MOS Note: Upgrading Applications Security in Oracle HCM Cloud Release 10 (Doc ID 2023523.1)

The main benefit of the simplified reference role model is that it has fewer role levels. It’s a flatter model.
On the following screenshots you can see the role Line Manager before and after upgrade:

After updating Job, Abstract roles you should:

The Security Console is a single administrative interface, available from the springboard on the simplified user interface, from where you can:

Before start to use Security Console within HCM module you have to complete two setup steps:

I try to stick to the following rules when I create custom Job or Abstract Roles within Security Console: 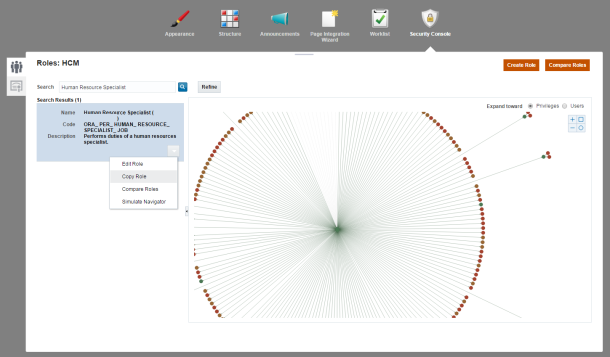 2. Make a copy from a Duty Role

3. Customize a copy according to the requirements 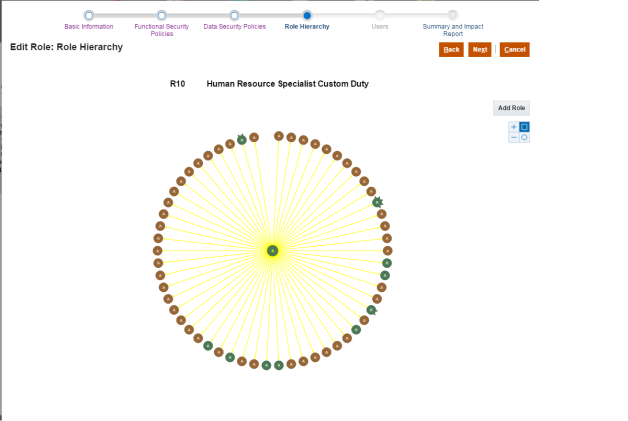 4. Create a custom Job or Abstract Role and assign the Duty created in the previous step 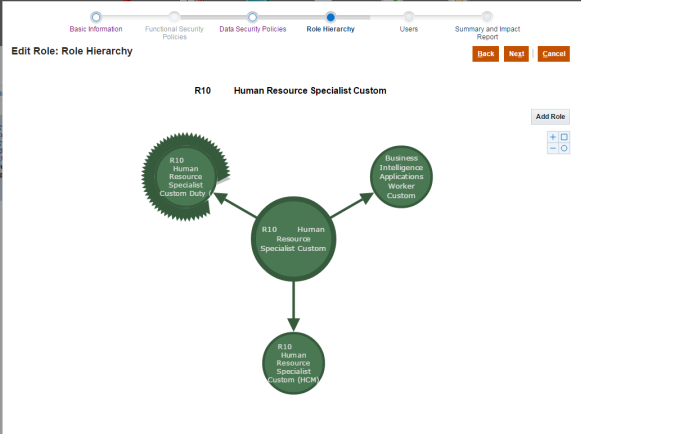 5. Assign a new role to a user

7. Create needed Security Profiles and Assign to a custom role

8. Check a user and make corrections if needed

I would like to wish you a Merry Christmas and Happy New Year!!!

This site uses Akismet to reduce spam. Learn how your comment data is processed.